The MCS division was divested from the Munters Group and the Polygon Group was born in 2010. Wholly owned by Triton, a private equity firm, Polygon today has a strong growth agenda and a dedicated focus on property damage control. In 2012, Polygon made two strategically important acquisitions. One was the German property damage control company Vatro, which gave Polygon a significant presence in Germany and nearly doubled the size of the Polygon Group. The second acquisition was leading moisture control consultancy AK Konsult in Sweden.

Polygon strengthened its expertise in document restoration through the acquisitions of Rapid Refile in the US in 2012 and Harwell Technical Services in the UK in 2015. Other significant milestones include the issue of a 120 million Euro corporate bond in 2014, as well as the appointment of a new CEO, Erik-Jan Jansen and acquisition of Tinkler Bau in Austria the same year.

In 2015 Polygon acquires the Document Restoration company Harwell in the UK. In US Polygon made a strategy shift focusing on Climate Solutions and Document restoration. During the same year the Polygon model is introduced in the organisation and the new corporate website is launched.

During 2016 Polygon started the Polygon Academy, a internal leadership development programme. During the same year Polygon also introduced the new business system Metrix and launched a new corporate Intranet.  In Canada we launched a Franchise model to expand our footprint. Polygon also successfully recapitalised a 60 million Euro tap issue under the existing bond.

In 2017 Polygon made six acquisitions in Sweden, Norway and France adding a total of EUR 65 million sales and over 500 new members to the Polygon family of dedicated specialists. An additional two acquisitions in Denmark and Germany were signed in the end of 2017 and were closed in the beginning of 2018.

In 2020 Polygon grew their market and entered both Italy and Luxembourg. By the acquisition of Hiotlabs, Polygon enabled to offer their customers end-to-end solutions for Property Damage Prevention. Hiotlabs posseses market leading technology solutions based on Internet of Things and Machine Learning. The solutions consist of sensors and software platform, with the purpose of detecting and preventing water damages in buildings.

2021
In September Polygon was acquired by AEA Investors LP and is embracing new opportunities to further increase its growth. 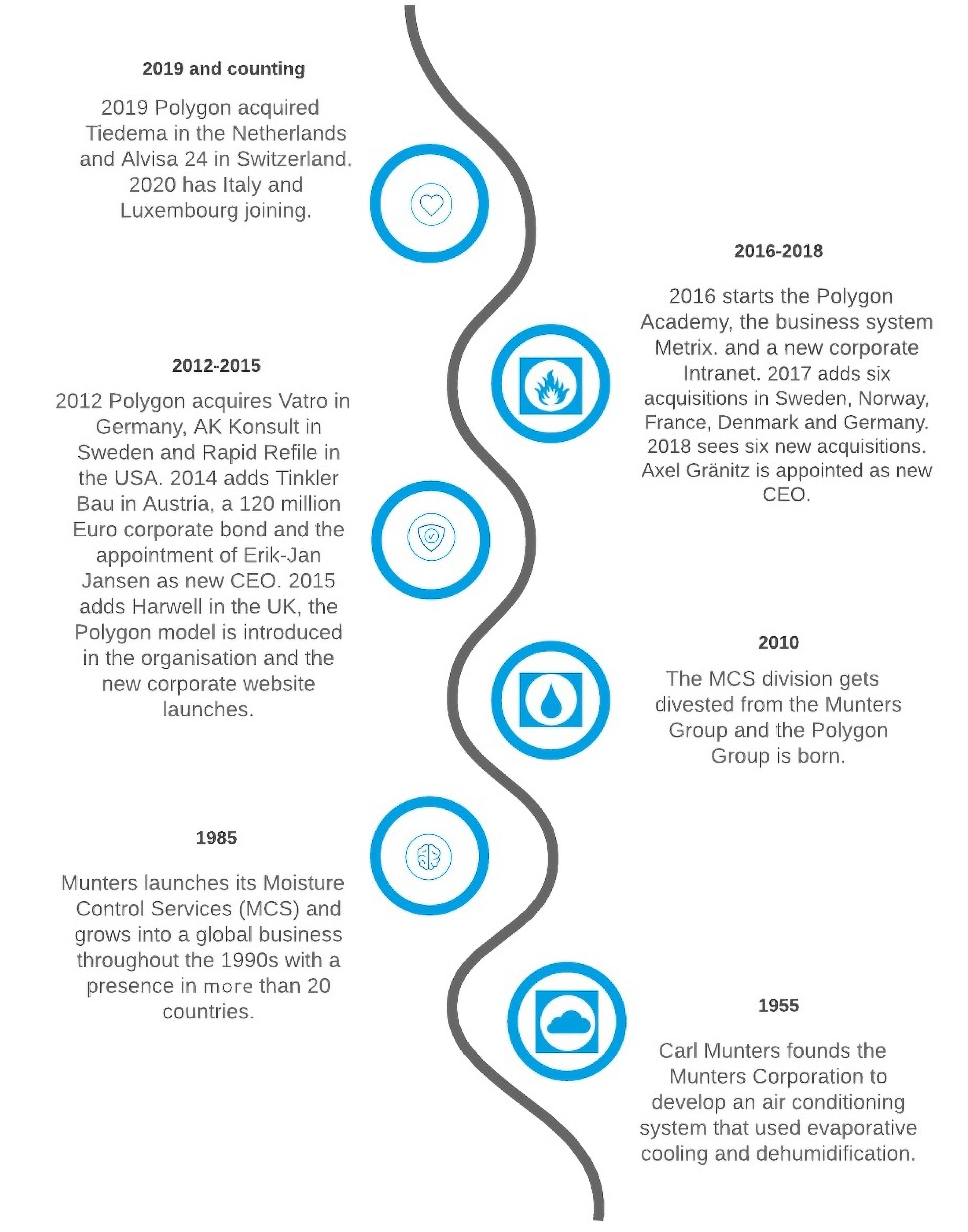 "Our objective for 2019 was to accelerate our ambitious acquisition agenda, whilst continuing to deliver profitable growth and lead the transformation of our industry. I am proud to say that we have succeeded with our efforts – and we made it through fantastic teamwork."

Polygon
Always By Your Side