Restore instead of demolition when snow load is fatal

After a heavy snowfall, parts of a production hall of an automotive supplier in Lower Saxony, Northwest Germany, collapsed. The entire roof structure was extremely unstable and threatened to fall on the production machines. To avert the disaster, the affected company’s insurance company called upon POLYGONVATRO.

The heavy snowfall caused parts of a production hall to collapse at night. Luckily, no one was injured, and the highly complex machines in the hall were not seriously damaged. However, the roof was prone to collapse. In damage scenarios such as this, the first option is often demolition. In the case of a claim in Lower Saxony, this is also the first thought. The main issue was that demolition would destroy the valuable machinery underneath. The insurance company finally decided to reach out to POLYGONVATRO. However, on the day that POLYGONVATRO’s project manager from the major loss department arrived on site, the snow load had become fatal.

During the first ascent, it quickly became clear that the construction, which weighed several tons, was still held in place by the heavily damaged roof girders. But, if it was to be torn down, the roof would fall uncontrollably onto the machines and bury them under. POLYGONVATRO also discovered that the main power line for the entire company ran in a single line exactly along the affected roof. This line could not be damaged under any circumstances, as this would have led to the failure of the adjacent and undamaged parts of the building. As renovation professionals, we knew that the customer's operations would have stood still for months if the roof structure had been torn down. The unconventional solution was for POLYGONVATRO to build a temporary production hall into the existing crash hall.

In coordination with an external structural engineer and other specialist colleagues, POLYGONVATRO created a construction schedule. The first step was to set up a construction site. At the same time, preparatory work also began, such as the construction of a temporary ramp. For this, many cubic meters of earth were moved so that construction machinery could approach the affected hall without any problems and with little destruction.

The goal was to save the machines and keep the customer's business interruption as low as possible. The two adjacent production halls posed a particular challenge. Not only did they have to be protected from consequential damage, but an operating temperature of 28 ° C had to be maintained to guarantee temperature-sensitive production in these halls. However, since the halls are open to one another, rain and snow penetrated unhindered through the collapsed roof and caused a continuous drop in temperature. The first task was to seal off and insulate the open parts of the building. The erected wooden structures fulfilled a double function: POLYGONVATRO was able to guarantee the desired average temperature with additional insulation material, and the unaffected parts of the building were also protected from unpredictable environmental influences.

After the roof had been freed from the remaining masses of snow, the first parts were dismantled. It was vital not to damage the cable route of the main power line. To ensure this, POLYGONVATRO supported it in advance with a scaffold structure and sealed it with weatherproof housing. To protect the machines from a possible complete collapse during the careful dismantling of the roof, POLYGONVATRO’s employees first clad the machines with a wooden structure and protected them against the weather. An additional space frame supported the damaged roof girders and prevented the roof structure from collapsing in an uncontrolled manner. For the construction of the temporary hall, POLYGONVATRO built a total of around four timber trucks.

After the dismantling was complete, POLYGONVATRO’s experts began building an emergency roof. Not only were all the necessary escape and rescue routes taken into account, but all necessary fire protection measures were also implemented, such as the installation of a fire alarm system. To provide additional protection for the load-bearing scaffolding, protective barriers were installed. Thanks to the barrier-free structure, production could continue undisturbed even in the damaged hall.

While many construction projects suffer from enormous time delays, especially during the COVID-19 pandemic, POLYGONVATRO offers everything from a single source. This enables them to react quickly and flexibly so that all schedules are adhered to and the work can often be completed before the agreed date.

Thanks to the smooth cooperation between POLYGONVATRO’s major loss department and the logistics centre in Olpe, the work in Lower Saxony was completed in less than four weeks. Our commitment made it possible for an external construction company to start building the new hall without interrupting the customer's operations. The new hall is now being built around the temporary structure. Thus, we not only thwarted the loss of the valuable machines but also reduced the business interruption to a minimum. That saves time and money for both the insurance company and the customer. 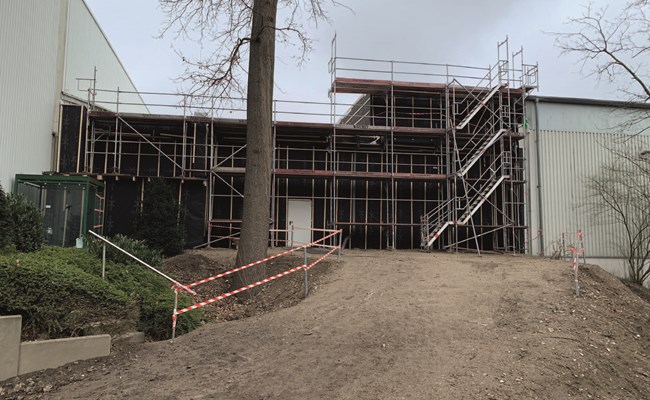