There are many causes of moisture damage and there are a variety of drying methods that can be chosen to return materials to their pre-incident condition. Polygon Norway has recently introduced Vacuum Drying, which involves establishing negative pressure under affected fabrics. This draws the water and moist air out of the materials. Vacuum Drying is a targeted method which means that only the affected area needs to be treated.

“We used the Vacuum Drying technique recently to manage two drying projects. The first was for an insurance company that had received a claim about a water leak in a kitchen caused by a damaged pipe. The water had spread extensively, and we had to dry the entire apartment, excluding the bathroom. The second was for a large contractor, who we have worked with in the past. They reached out to us when a cracked façade in an apartment block started leaking following heavy rainfall,” Sigurdur explains.

“In the first scenario, we agreed with the insurance company to install the new drying technique in the water damaged apartment. When we arrived at the apartment, the furniture and flooring had already been removed so we were able to install our dryers in the kitchen, living room and bedroom. RF measurements were taken of the concrete deck before we started drying and measurements were then taken eight days later. The measurements showed that we had dried the concrete from 95% RF down to 75% RF,” says Sigurdur.

“The large contractor also agreed to use Vacuum Drying instead of heat mats due to the ambient temperature. This method allowed the contractor to carry on with other works that were needed to finish the housing project while we dried the construction. Polygon Norway’s subcontractor Mycoteam took control of moisture measurements so that we only had to complete the drying,” continues Sigurdur.

“Vacuum Drying was installed in three different places where the water had caused damage. Before drying commenced, moisture levels were measured in the concrete deck according to the RBK method of 93% RF. Mycoteam estimated 4-6 weeks of drying with a requirement that the humidity in the concrete deck should be below 90% RH. Four weeks later, Mycoteam took new measurements and the RF in the concrete deck was measured at 83% RF,” Sigurdur concludes.

Heat is another effective drying technique that can be used in conjunction with the vacuum method, but consideration should be given to the surroundings and other materials that could be damaged by higher temperatures.

The hotter the material is to be dried, the faster and more efficient the drying process becomes, when the vapor pressure difference increases in the soft material. Only machines suitable for this type of drying should be used for this technique. In areas with high humidity in the concrete deck, it is strongly recommended to install a water separator, to prevent water from being transported into the drying machine and causing damage to the high-pressure fan. The air that is drawn from the construction should always be led out of the building. This prevents water in the air from damaging the inside of the building during the drying process.

To shorten drying times, you can increase the temperature of the air or temperature in the material. A distinct advantage of the vacuum technique is that there is a very small temperature increase in the residential area, while the drying time is reduced. In some cases, the resident will be able to continue to reside in the property. 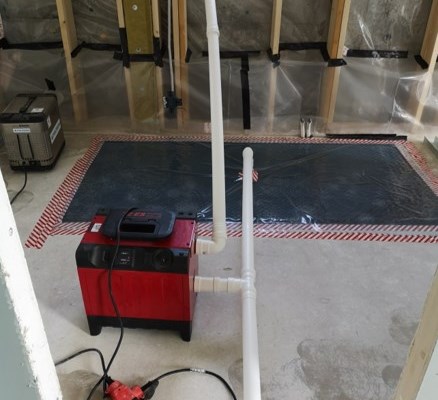 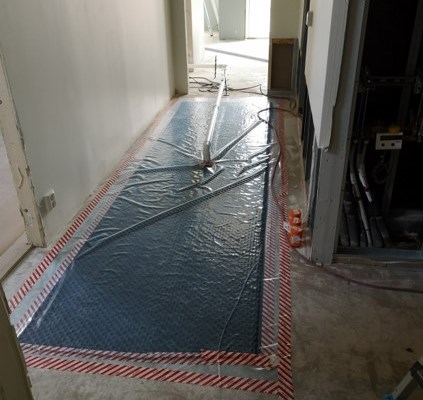