Always By Your Side – New Year's fire emergency

When our team in Polygon Denmark arrived at the scene of a major roof fire in a residential building, they knew that it would be an “all-nighter-effort”. Despite it being New Year’s Eve, they instantly got started on the urgent issues with initial damage control, as firefighters were still gaining control of the blaze. The project resulted in a 20–24-hour long effort. Here, we speak to Michael, a Polygon project leader, to find out more.

The reason to why the fire started in the Copenhagen residential building is still unclear, however it is known that it started first in a nearby shed with waste containers. Later, around 8 PM on New Year’s Eve, it spread to the roof of the connecting residential building, causing damage to two-thirds of the entire roof. In the process of gaining control of the fire, firefighters had to use massive amounts of water, which in turn lead to water damages in the flats below.

Michael Bøgebjerg, a project leader in Polygon Denmark, explains the situation. “We initially had challenges with the building’s chimneys, which caused the entire structure to be unstable. Since the structural support was burnt down, the chimneys were at risk of tipping over, so we, and the firefighters, could not venture into the building for around three hours, until a crane arrived to demolish the chimneys. This made it necessary for the firefighters to use more water, since they had to extinguish the fire from the outside instead of the inside”, Michael says.

Different stages in a large-fire operation

Initially, when the blaze was still ongoing, the team handled the damage control in terms of extinguishing water, roofing and securing doors. The following day, the main focus was re-establishing the electricity, water, heat, and gas for the entire building.

Michael continues. “Fortunately, none of the unit flats were hit by the actual fire. However, 9 out of the 19 flats in the building had been, in different severities, contaminated by the extinguishing water. This was why we opted for a quick fix of the electricity and other necessities, so that the 10 uncontaminated flats could get back up and running as soon as possible. Another urgent matter was placing emergency roofing, and coverings where we could, to protect the building from the elements”, he explains.

A subcontractor was later hired to make a proper temporary roofing solution and scaffold. The later parts of the project, which is still ongoing, includes demolition of the original roof construction, drying of the water damaged flats, mould detection and also restoring the inventory of some of the damaged flats.

Generally, the project now is working toward getting the building ready for reconstruction. 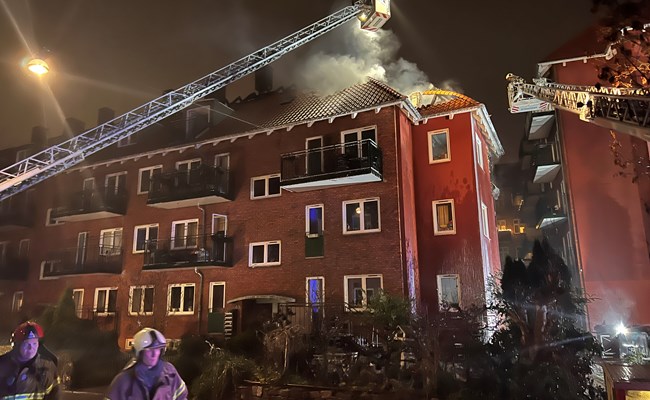