When a water pipe burst in a residential home in the Netherlands, just a couple of days before Christmas, substantial water damages were apparent. Identifying the leak was the first urgent step, because unfortunately, water damages do not go on holiday during Christmas, and this situation required immediate action. Luckily, Polygon Netherlands stepped in, to make sure the residents had a functional home in time for the holidays.

To solve this issue, the leak detection team was deployed. Bert de Man, a Polygon technician, explains the process of identifying the leak. “When performing an initial visual inspection, we found that when opening the main tap, water leaked from the suspended ceiling in the bathroom. High moisture measurements in the bathroom and in the connecting home office space also revealed extensive damages”, he states.

The leak in the bathroom had accumulated so much water that it was spilling over the sill, into the home office area. The damages rendered the bathroom unusable and without proper water functions.

Bert continues. “In consultation with the client, we removed part of the bathroom ceiling, in order to look for the leak in the water pipe. Eventually we found the leak, and it was repaired swiftly. We also did a pressure measurement of the pipes for inspection, and we found no pressure loss after repair.”

Dealing with the aftermath

After a leak this severe, the sooner you start a technical drying process, the less consequential damage tends to occur. In this project, the Polygon Water Damage Restoration team in the Netherlands, was also deployed, to handle this process. In addition, the team was assigned to remove the laminate floors, and ceiling of the bathroom.

Thanks to Polygon’s quick action identifying the leak, the residents could return to a home with a functional bathroom, just in time for Christmas.

Want to learn more about our services in leak detection? Click HERE 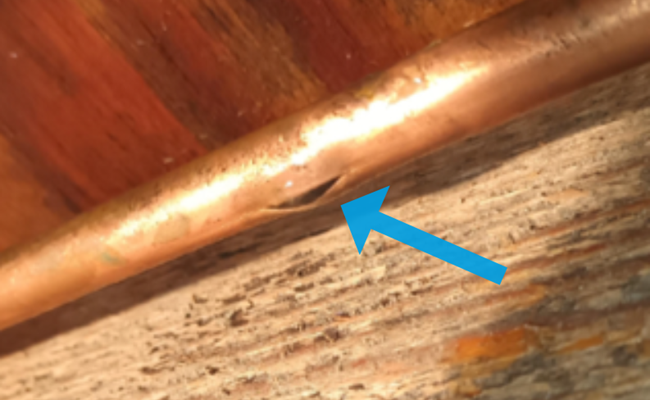 The seemingly small leak, that caused such a big disaster.