When the smoke alarm sounded at a hotel in Veendam, Netherlands, and was subsequently followed by a strong smell of smoke, staff quickly evacuated guests and called upon the emergency services to help.

Firefighters and the police arrived promptly to secure the property and extinguish the fire. The fire was caused by a pyrolysis oven in the kitchen. This type of oven uses heat to clean itself. The heat from the back of the oven passed through the wall and ignited nearby wood.

The firefighters reacted swiftly and were able to access and open the roof to further investigate the source of the fire. The fire itself was relatively small but unfortunately it resulted in extensive damage to the hotel.

Albert Weij, Director and Hotel Owner of the Brouwhotel Parkzicht Hotel, reflects on the situation he was faced with that Sunday morning, “Suddenly, you no longer have a say in the fate of your property and that is very difficult. You just have to wait and see what will be left after the fire is extinguished. Fortunately, loss of turnover was not too significant, however, you do have to adjust your framework. I hope I will never experience this situation again. But the most important thing you must focus on at a time like this is how you can get back to business as quickly as possible.”

Due to the extent of the damage, Polygon’s Project Manager of the Groningen Branch, Jaap Bron, who was not on duty at the time, immediately travelled to the scene. Jaap explains, “The fire took hold on a Sunday, during the hotel’s breakfast service. We immediately began work the same day, disposing of the extinguishing water, cleaning up fire residues, closing the roof and installing dryers. The first stage of cleaning the kitchen and installing deodorising equipment also took place on Sunday. Polygon also arranged for someone to come and inspect the electricity and gas supply.”

Due to the speed of Polygon’s initial response, the team was also asked to fulfil the restoration and repair work, which included:

As a result of everyone’s efforts including Polygon’s specialist team, who cleaned the hotel’s vents and grease ducts, the hotel was back up and running in just four weeks.

Fortunately, the hotel has two kitchens which allowed them to remain open throughout the repair period. The second kitchen was used as an a la carte kitchen, and a wooden partition was put in place to shield the work from guests, allowing the teams to continue working, without causing disruption and interference.

Albert Weij was extremely satisfied with the results and said, “We were immediately unburdened by Polygon who ensured we could resume business as usual in no time at all. After only four weeks, the work was complete. Polygon guided us through the entire recovery process and their hard work and experience made this as painless as possible.”

The impact and damage from fires can be extensive. At Polygon, we understand that getting back to normal and minimising business interruption is vital. Do you have questions or need help with fire damage repairs? Get in touch with one of our offices HERE.

Polygon – Always By Your Side. 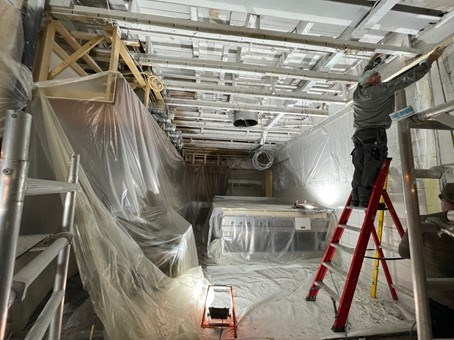