Due to vandalisation in the boiler room of a building in France, an electrical cabinet sustained damage. The damage occurred when extinguishing a fire, and powder from the extinguisher contaminated the cabinet. Polygon France was assigned to handle the technical reconditioning of the cabinet. With Polygon’s extensive experience and knowledge within the field, the job was solved efficiently.

The company contacted Polygon with this project and added another challenge to the mix – the electrical cabinet could not be turned off during the decontamination. Apparently, the cabinet played an important role in keeping the building heated. If it would be shut down, even for a short period of time, the building would lose most of its heat. Considering that we are now in the winter months, this was not a viable option.

Hedi Derouiche, project manager in Polygon France, explains the process. “A vacuuming technique was used, to gather all the powder from the cabinet. In spots where the vacuum couldn’t access, we use a waterless microfiber rag. This rag is dielectric, meaning that it does not conduct any electricity”, he explains.

Considering that it was a live electrical construction, with high voltages being conducted within, taking safety precautions and planning ahead was vital. Firstly, carefully studying the electric scheme of the installation gave the team an insight into how the project could be solved. They saw that the area that needed work was in a low wattage area protected by fuses and differentials. That, in combination with the use of safety equipment, and a colleague always close by, rendered the risk of electrical disaster practically non-existent.

The work was quickly finished, and the building’s heating never had to be affected by the work, since the team managed to finalise the project without ever shutting down the cabinet.

Want to learn more about our services in technical reconditioning? Click HERE 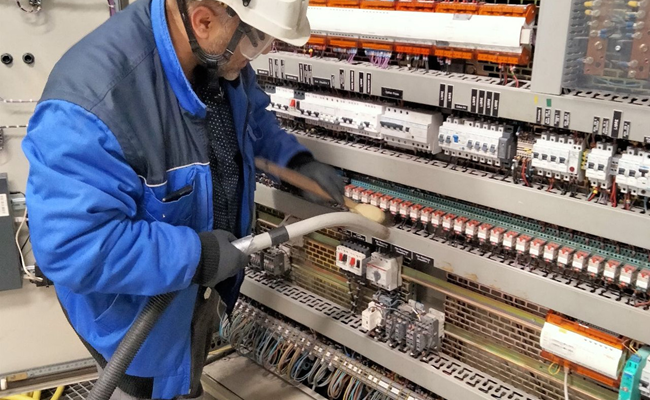 Technician working with the vacuuming technique