An automatic sprinkler system was activated in a parking garage in Hellerup, situated just north of Copenhagen in Denmark. A short time after, another automatic smoke alarm was activated in a store in the same building. Heavy smoke was discovered, and additional assistance was required immediately. Forty firefighters took control of the fire and Polygon Emergency Services were called in to assist.

Upon arrival at the site, heavy smoke was seen emerging from the ventilation ducts and descent ramps leading to the large garage. Additional assistance was requested immediately, and within 30 minutes, a total of four emergency units arrived, including people from Polygon DB and POLYGONVATRO.

“We got a call from the fire department early in the morning. They told us there was a fire in a 2,000 square metre garage. At the time of the call, it was unknown what was burning. It was thought to be an electric car but there was no confirmation of this. Due to the heavy smoke, the source of the fire couldn’t be located straight away,” says Michael L. Mølgaard, Major & Complex Claims Manager at Polygon DB.

The fire department eventually found a burning car and as expected, it was an electric-hybrid car. However, they could not confirm whether it was the battery or motor that was on fire. Given the extent of the fire, the location of the batteries and the continued development of smoke/fatigue, the decision was made to remove the vehicle from the garage to handle it within a fire extinguishing container. Once the car was removed, Polygon DB could start their work in the affected areas.

The first step was to remove the smoke from the store and make a rapid assessment of the areas affected to ultimately understand the extent of the damage. It turned out that at least five apartments had also been affected by the smoke.

“After putting on our equipment, we went to the store and installed fans to begin removing the smoke. POLYGONVATRO also carried out tests for any toxic Hydrogen Fluoride and Chloride gases,” Michael L. Mølgaard continues.

Once the smoke had been removed from the store and apartments, Polygon DB turned their attention to getting rid of the smoke in the garage and restored parts of its ceiling that the fire department had taken down.

The insurance company and the landlord of the building were contacted and a few days later they joined Polygon DB on site to further assess the extent of the damage.

“We are now waiting for an assignment from the insurance company to complete the rest of the cleaning and restoration,” Michael L. Mølgaard concludes. 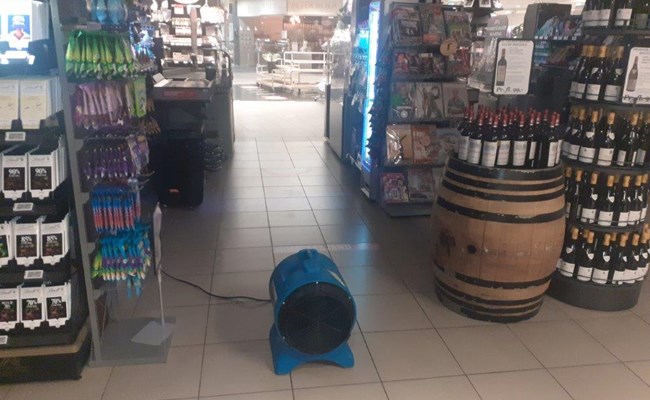