What do you do when high radon values are measured and the explanations you believe in, are incorrect? Radon competence, combined with a building damage investigation, is what is required when the detective work begins once a radon leak has been identified.

In mid-August, Polygon | AK's radon expert Nils Hedström received a call from the project manager Masood Mirzakhani, located just north of the Stockholm City Centre in Solna, Sweden. After recently completing a project with radon measurements in most of the municipality's preschools and schools, they were confident that Polygon | AK would be able to handle this new problem just as efficiently.

The city archivist at Solna City Hall was retiring and wanted to structure her archive on level -2 before handing over. None of the staff had any symptoms from radon, but she wanted to make sure that there was a good indoor environment in the archive. So, they would be able to check if the content of radon was within the limit.

Radon is a radioactive noble gas that is formed naturally in the bedrock when radium decays. The gas can enter buildings from the ground, building materials, or domestic water. When the gas decomposes, other radioactive substances are formed, namely the so-called radon daughters. Accompanied by the inhaled air and the radiation emitted by the radon daughters can damage the lungs and trachea. The Swedish Radiation Safety Authority (SSM) estimates that radon in homes causes about 500 lung cancer cases per year in Sweden and, it is mainly smokers who are affected.

Invisible gas that must be measured

Nils had to start a radon investigation since the gas does not smell, taste, and is not visible. This means measurement is the only way to detect radon.

"We started by measuring the radon content in the archive on level -2 to determine if there were high values. We placed four cans of radon trace film in the archive's premises. The instructions are one box per 500 square meters, but there were so many doors, rooms, and nooks on that level, which meant we needed to put out more boxes than recommended” says Nils.

"Since radon spreads from the bottom and upwards, the initial thought was that the central vacuum cleaner on level -3, with pipes going to all levels in the house, was the actual issue. But measurements showed nothing that exceeded the limit values, not even on level -1. That was where the first assumption failed” says Nils.

Why do these values exist at level -2? It turned out that there were drainage pipes around level -2 that were not found on other levels. These pipes are usually located at the bottom of a house, but in this case, it was probably not possible on level -3 due to the groundwater level. The drainage pipes have four collection and inspection locations consisting of 1x1 m large concrete boxes placed outside the house wall. These concrete boxes are accessible via hatches in the archive's outer walls.

"When we measured inside the concrete boxes, the value was measured at 15,000 Bq / m3. But had we found the problem? My consulting colleague Johan Eriksson and I considered that smoke now needed to be pressed into the drainage system so that it would be clear where the radon leak was. Should the test emit smoke somewhere around the house, for example from a hidden drain, there would be a simple solution to the entire neighborhood’s  radon problem; to create a negative pressure in the system with a suction fan.” Nils explains.

Can the smoke test give us the answer?

All fire alarms in the house were turned off, as they were unsure where smoke would leak out of and the fire services were notified of the test if the public were to report any smoke development in the area.

Gray fog seeped out and filled the concrete box as the smoke cartridge lit up and the fan pushed the smoke.

“We anxiously waited at the bottom of the house, to see where the smoke would blow out of. But, no smoke was seen around the house. The smoke only went from inspection hatch to inspection hatch at level -2. We began to wonder if the drainage system had no connection to the ground level above.” Nils continued.

The door openings were sealed and glued shut again, and another two-week measurement followed to see if this was the solution to the problem. The follow-up showed that the radon content was lower on level -2 after the door was sealed and that the leak had finally been found! The solution, in this case, was an ordinary ventilation system with sealed air leakage points instead of installing a radon fan.

The project ended with a long-term measurement to ensure the result. Even if a project takes many tricky turns, there is usually a natural explanation - you just have to find it! 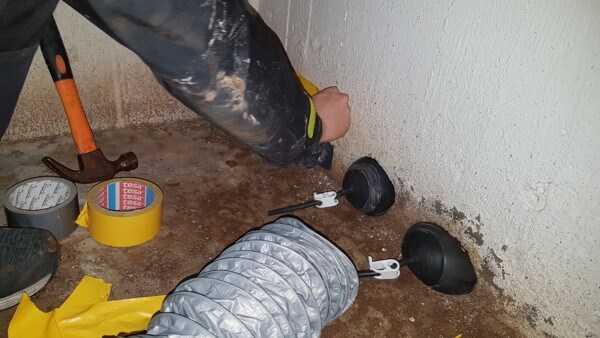