When severe storms led to extensive water damage in a new apartment building in Southern Sweden, approximately half a million kronor was saved for the client thanks to Polygon | AK’s first-class response.

Jakob Grahn, District Manager of Climate Management in Skåne, Sweden, received the initial instruction one week after the damage occurred. Because of this delay, time was a crucial factor in minimising microbial growth, and therefore maximising how much of the damaged material could be saved from destruction.

An initial inspection showed that 39 out of 95 apartments on the fifth floor of the building were water damaged after two heavy rainstorms. Samples were taken to measure the microbial impact; high-pressure machines were installed, combined with dehumidifiers and fans, and positioned at plaster walls and the roof structure.

What happened and how can it be avoided?

Jakob Grahn, Project Manager at Polygon | AK, said, "The leaks were primarily due to inadequate planning for weather protection. Unfortunately, this is common. Lack of time, and a desire for higher profitability, means that many entrepreneurs are taking risks with less secure solutions. They would instead benefit from investing in solid weather protection from the beginning."

Moisture damage is common, especially within modular buildings. The modules are plasticised during manufacture for storage which is where problems begin. Particularly if storage takes place outdoors in cold weather, where conditions cause the materials to swell and crack. When transporting the modules, it is also common for the plastic to be perforated at the outer edges. According to the manufacturers, this wrapping should be enough to provide adequate weather protection, but unfortunately this is rarely the case.

What should be done instead?

Jakob continued, "The most important thing is to work proactively and think ahead. If Polygon | AK is involved in a project from the outset, the team can apply their moisture expertise early on, thereby saving money for the contractor. For example, by ensuring that roof protection is comprehensive to avoid problems later in the process."

When the apartment building in southern Sweden was affected, Polygon | AK was quick to respond and attend the site. As a result of the company’s effective collaboration between its various business areas, damage and costs were minimised for the customer.

“Since Poygon | AK has a comprehensive range of services, we were able to handle the assignment effectively. We used our temporary climate control solutions, dehumidification and more specialised sampling service, Polygon’s Biocontrol. In all, we saved around half a million kronor for the client,” Jakob concluded. 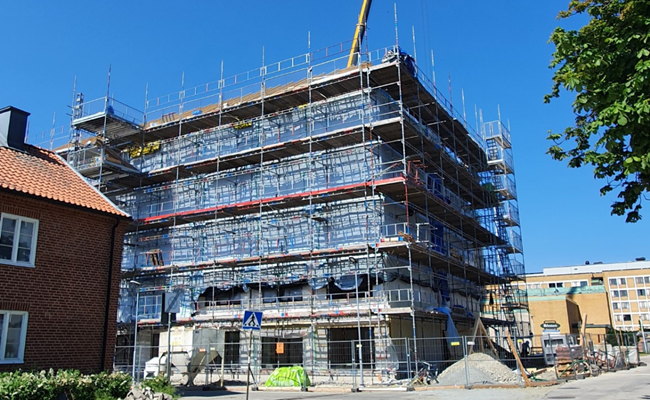