When thousands of gallons of water flooded the new 1,400-room Hilton Hotel in Orlando, Florida, US, it was like a scene from a nearby water park in the popular Florida resort area. But fast action and expert drying by Polygon assured that the construction schedule proceeded as planned.

With only the top three floors of the hotel yet to be completely furnished, an elbow joint in the main hot water feed on the roof of the 19th floor came apart, causing water to gush through hallways, guest rooms, stairwells and lift shafts, and cascade 19 floors down to the hotel lobby.

“Every floor experienced water damage and the amount of water was so extensive that it blew out the lobby ceiling, 19 stories below the pipe break,” said Brian Kuckelman, senior vice president of architecture and construction for Rida Development, the developer handling the Hilton Orlando project. The flooding raised concerns about the hotel’s scheduled completion – less than a month away.

A representative from the project’s general contractor, Welbro Building Constructors, immediately contacted Polygon, who ensured a project manager was on site within 45 minutes to assess the damage.

Within hours, Polygon had equipment up and running, including portable desiccant dehumidifiers, air movers and dehumidifiers in rooms and hallways. Polygon personnel were on site by the middle of the night, and by early morning, additional equipment had arrived from all over the country.

“Thanks to the company’s rapid response, sound advice, breadth of capabilities and a recommendation from the general contractor, we decided Polygon was the ideal candidate for the job,” said Kuckelman.

The huge project required quick drying out of all structural components, including carpeting and walls and ceilings in rooms and hallways, and maintaining good air quality to help prevent formation of mould. Polygon used 18 desiccant dehumidification units of varying sizes plus 130 smaller refrigerant units placed strategically throughout saturated areas of the hotel. The larger dehumidification units provided dry air to varying floors of the hotel through ductwork situated up the side of the building. Polygon also used 1,500 air movers arranged in hallways and rooms during the course of the project.

The project brought many challenges. Because the hotel did not have adequate power to handle the load of all the drying equipment, nine diesel generators were used to temporarily power the equipment.

Polygon technicians were able to minimize tear out and prevent mould growth, saving tons of drywall, paint, carpet and other building materials, and the time it would take to replace all of them.

The drying process throughout the hotel was completed in just over a week, after which the furnishing of the rooms and construction commenced and the hotel was able to open on time as planned. 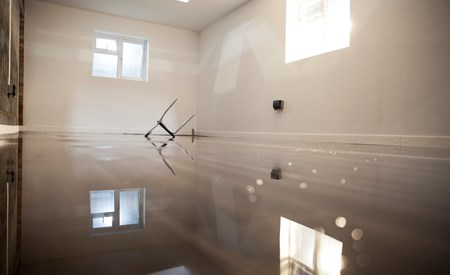 At the end of February, a new training facility for simulation of water damage was inaugurated at...