Children and staff members of a day-care centre just outside of Stockholm, Sweden, complained about a lingering odour in their facility. An inspection was ordered. The inspection determined that the foundation of their building was in poor condition, creating the odour. Polygon Sweden was hired to fix the problem by cleaning, demolishing, measuring moisture levels and installing dehumidifiers in the 1200 square meter crawl space beneath the floor of the day-care.

Crawl spaces are generally considered to be sensitive areas in a moisture damage point of view. Water and moisture gather there and often have virtually nowhere to escape. However, the main reason for the preschool's problems is believed to be that a sewer pipe in the crawl space came apart during heavy rains, which in turn has led to mould growth and a bad smell. With a wide range of services in handling property damages, Polygon gets to work.

The crawl space that needs work is 60 meter long and 20 meter wide, but only 0,5 meter from floor to ceiling. This means that our technicians had to carry out the work in a crawling position in the dark space. "The first part of the project was very physically challenging, since the insulation had to be torn down from the joists by hand and then torn into smaller pieces so that it can be sucked out. Afterwards, slag and wet soil are vacuumed from of all visible surfaces," says Christer Husman, Supervisor at Polygon. "The next step is to add washed shingle (gravel), as a so-called protective capillary break layer, on the moist ground. After this, an age-resistant plastic is spread out in the space and attached to the foundation wall," he continues.

Furthermore, it has been verified that the existing ventilation of the foundation does not conflict with the one to be installed. "If it did, we would have to deactivate the current ventilation so that the two systems do not work against each other, but luckily, that situation did not arise," Christer explains. “Finally, it's time to install the crawl space dehumidifiers, where four machines are required. This is also challenging work because everything is done in a crouching position or lying on your back due to the ceiling height," he says. “Electricity is connected where it’s needed and pipes are laid on the ceiling and along the walls. Lastly, the devices are tested and quality is ensured."

By installing dehumidifiers in the crawl space, the preschool invested in a long-term solution that solved both ongoing moisture and mould problems while also preventing future damage. The devices can now contribute to a healthier indoor environment for both children and employees in their everyday lives.

Want to learn more about our services in Climate Control? Click HERE 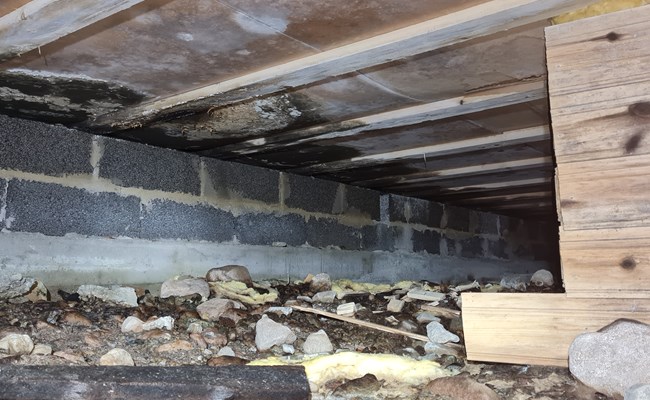